Badger fat is not a medicine, but helps! 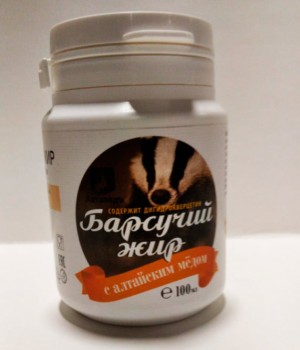 From ancient times, people had knowledge of how beneficial badger fat is and how it can be used. In anticipation of the onset of winter, they hunted badgers to get this valuable fat. In those days, colds and rheumatic complications associated with them, carried a serious threat to life, and badger fat can work wonders.

Even in the ancient manuscripts of the Catholic saint Hildegard of Bingen there are references to its healing properties.

All living things, no matter what kind they belong, perform a specific task, which is part of the natural interaction of all the forces of the Earth. Observations of badgers show that they spend most of their lives underground and are well prepared for this. Badgers dig their shelters only in those places where the level of terrestrial radiation that they need during hibernation is high. The fact is that radioactive radiation (primarily solar radiation, electromagnetic waves, thermal radiation, similar to that emanating from medical devices, and so on) warms their somatic cells throughout the entire period of winter rest. In addition, badgers, like bears, accumulate a thick layer of fat in anticipation of the onset of winter, which warms them, nourishes the body with water and supports its functions, which are reduced during sleep (fat contains chemically bound water).

Badger fat is used alone, as well as in combination with beeswax.

Badger fat is a pure product created by nature. The reason for its beneficial properties is the biologically active substances contained in it, which accumulate in the body of badgers to maintain the body's functions during the several months of winter hibernation, which these animals spend without food and water. For more than two centuries, badger fat has been used in official and traditional medicine as a highly effective prophylactic and healing agent.

When taken orally, it is completely absorbed in the blood, enriching the body with the necessary trace elements, organic acids and vitamins. In addition, it enhances immunity, improves the functioning of the hematopoiesis system, and enhances protein metabolism. The intake of badger fat helps prevent the development of various types of tuberculosis, normalize the secretory activity of the stomach and intestines, and improve mood. In addition, purulent processes slow down, fistulas and foci of infection are closed, wounds are cleaned, and recovery begins.