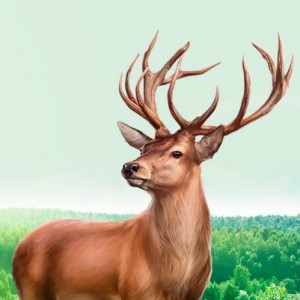 Altai maral - Cervus elaphus sibiricus. Anyone who has ever seen him will not soon forget this proud and noble animal. These are large and strong animals: the growth of adult deer reaches 160 cm, weight - 300 - 350 kg.

Maral is one of the most unusual manifestations of Altai nature. It is known that for many centuries people used the blood of this noble animal as a therapeutic agent that strengthens the vitality of a person and delays old age.

Golden is one of the meanings of the word “Altai”: traditionally, it corresponds to the very best created by man and nature. Unique properties of Altai maral - golden maral! - have not been repeated anywhere else, and for this originality they are valued all over the world. Maral is not only a constant figure in the mythology of the Altai peoples, but also an object of material profit as a very expensive export product. Altai deer products have gained popularity among Russians relatively recently, although for many years it has been exported as a means of preventing many diseases used by medicine, mainly in Southeast Asia and China.

The habitat of maral is Altai, New Zealand, Tien Shan, Kyrgyzstan, Krasnoyarsk Territory. According to statistical reporting, about 56 thousand livestock are concentrated in maral farms of the Altai Republic, and in the regions of Altai Krai that are engaged in maral breeding - Altai, Soloneshensky, Charyshsky - about 28 thousand. In Kazakhstan, several deer farms that were founded in the Soviet Union have survived. The females are somewhat smaller. Brown-gray maral wool; in spring, after molting, it turns reddish-red. Little deer, like deer, are spotted. Red deer usually live in small groups, a deer and 3-5 red deer, the so-called "harem". By the way, maral families are very democratic, and usually the desire of a maral to replace a harem does not cause any excesses.

Little deer are born in late May - June, and the first days they are completely helpless. In general, small deer have an innate ability to camouflage; up to a month of age, the maralok does not run from danger, but hides in a secluded place and can lie like that for days. Marals are very nervous animals; on the one hand, shy, on the other, hot-tempered and aggressive.

Young marals rarely play; more often among them there are real boxing brawls. Two deer rise on their hind legs and beat each other with their front legs, until the weaker one surrenders. By the way, despite the impressive size of the horns (in adult maral, they reach a length of up to 120 cm, with 5-6 branches of 25-30 cm, and weigh up to 10-12 kg), maral are not able to seriously injure the enemy or each other.

The ends of all long and sharp processes are bent steeply upward, and a blow can be dealt only by bending the horn. So the front hooves are a more terrible weapon. Sometimes, however, it happens that due to any deviations in the maral, “wrong” horns grow - long, straight, with sharp ends without branching. Hunters and deer hunters call such deer “killers” and immediately shoot them. Red deer are even more aggressive than males, especially during offspring. An enraged red deer is quite capable of driving away a wolverine, lynx or wolf from a cub. Quite large predators prefer not to mess with a huge fury. A wolf or a bear can crush a deer in general only by driving it onto the ice of a stream or river, or into a deep snow blow, where the deer is helpless. In other cases, it is easier for predators to look for easier prey. Most deer are afraid of man.

PANTS - young, vernal horns of red deer, real deer, before the shirts, bast, bought in China for a medicinal drug, fall off them. Explanatory Dictionary of Ozhegov, 1949

PANTS - young non-ossified horns of maral or sika deer, the extract of which is used to prepare medicines. So, deer antlers are young, not ossified antlers of red deer - deer. Used for the preparation of a stimulating drug pantocrine. To obtain antlers, deer are bred in special farms.

The same deer will stand a few meters from the person carrying her cub, and does not dare to repulse him. Barely smelling a human smell, deer are immediately carried away, so it is very difficult to see a shy animal. In natural conditions, deer live on average 12-14 years; in captivity, surrounded by human care, can live up to 25-30 years. Red deer and deer are kept in conditions as close to natural as possible in huge fenced areas. Frightening animals feel free, and at the same time they are under the careful care of a person. Red deer, including red deer, is an important commercial animal, a favorite hunting object. At the end of the 19th century, 25,000 animals were mined annually in Siberia and the Far East; ossified horns, meat, and skin were in demand. But the greatest value, as before, and now are antlers - young horn.