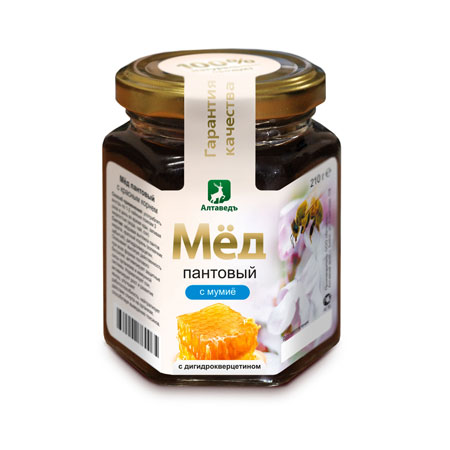 Honey - a natural dietary product created by nature itself, has a restorative, antimicrobial and analgesic effect.

Antlers of maral have a tonic effect on the body, stimulate sexual function, accelerate tissue regeneration. According to the pharmacological properties, maral antlers have a pronounced tonic and adaptogenic effect, increase mental and physical performance, especially in the conditions of overwork and monotonous activity (the work of drivers on long flights, operators, programmers). Antlers of deer are used as a tonic and stimulant for mental and physical fatigue, asthenic conditions, neurasthenia, neurosis, sexoneurosis, sexual weakness, menopause, arterial hypotension, gastric ulcer, anemia, for the prevention and treatment of sports injuries, overtraining conditions.

Mumiyo is a biogenic stimulant and bioregulator of natural origin, contributing to the normalization of metabolic processes in damaged organs, tissues and body systems. It accelerates and enhances bone tissue regeneration during fractures, skin and stomach wounds, trophic ulcers of various origins, increases the liver's ability to neutralize toxins and stimulates its regeneration. It stimulates the body's immune system, has a high antibacterial activity for the prevention and treatment of infectious diseases and complications. It has a rejuvenating and restorative effect on the body.

Dihydroquercetin is a reference antioxidant of vitamins of group R. The antioxidant effect significantly exceeds the level of action of well-known vitamins A, C and E. DHA has capillary-strengthening, hepatoprotective (antitoxic), gastroprotective (activates the regeneration of the gastric mucosa), anti-inflammatory, hypolipidemic and anti-sclerotic) .

Directions for use: Take 1-2 teaspoons orally 3 times a day with meals, washed down with liquid (water, tea, juice).